The first time I watched the first two Godfather films I appreciated and acknowledged their brilliance but didn’t fall head over heels for them like the rest of the film community. Subsequent viewings have well and truly sorted that out. Francis Ford Coppola and Mario Puzo’s study of the Corleone Mafia family are absorbing tales of family, tradition, greed, corruption, revenge and power, featuring of the strongest writing and acting ever put to film.

The Godfather begins in 1945 with Don Vito Corleone (Marlon Brando), head of the Corleone New York crime family, well and truly entrenched in that role. His only daughter Connie (Talia Shire) is getting married and following tradition, Vito cannot refuse any requests on this special day. One such request eventually sees a cut off horse’s head in a film producer’s bed, one of the many enduring images from the film. Vito’s two elder sons, Sonny (James Caan) and Fredo (John Cazale), as well as adopted son Tom Hagen (Robert Duvall) are involved in the family business to varying degrees- Sonny and Tom very much so, Fredo as little as possible. Younger son Michael (Al Pacino) however, recently returned from World War II, is considered a civilian. He brings his girlfriend Kay (Diane Keaton) along and shares with her some of the peculiarities of the family business.

Following the extended wedding opening, the plot kicks into gear when Vito refuses an offer from Tattaglia (another of the NY crime families) associate Virgil Sollozzo (Al Lettieri) to enter the drug game. An attempt is made on Vito’s life, the effects of this not just impacting Vito himself, but the extensive New York crime world and his entire family, and most notably the life of his youngest son. Michael volunteers himself to take out Sollozzo and crooked police captain McCluskey (Sterling Hayden), throwing himself well and truly into the deep end and completely changing the course of his life. 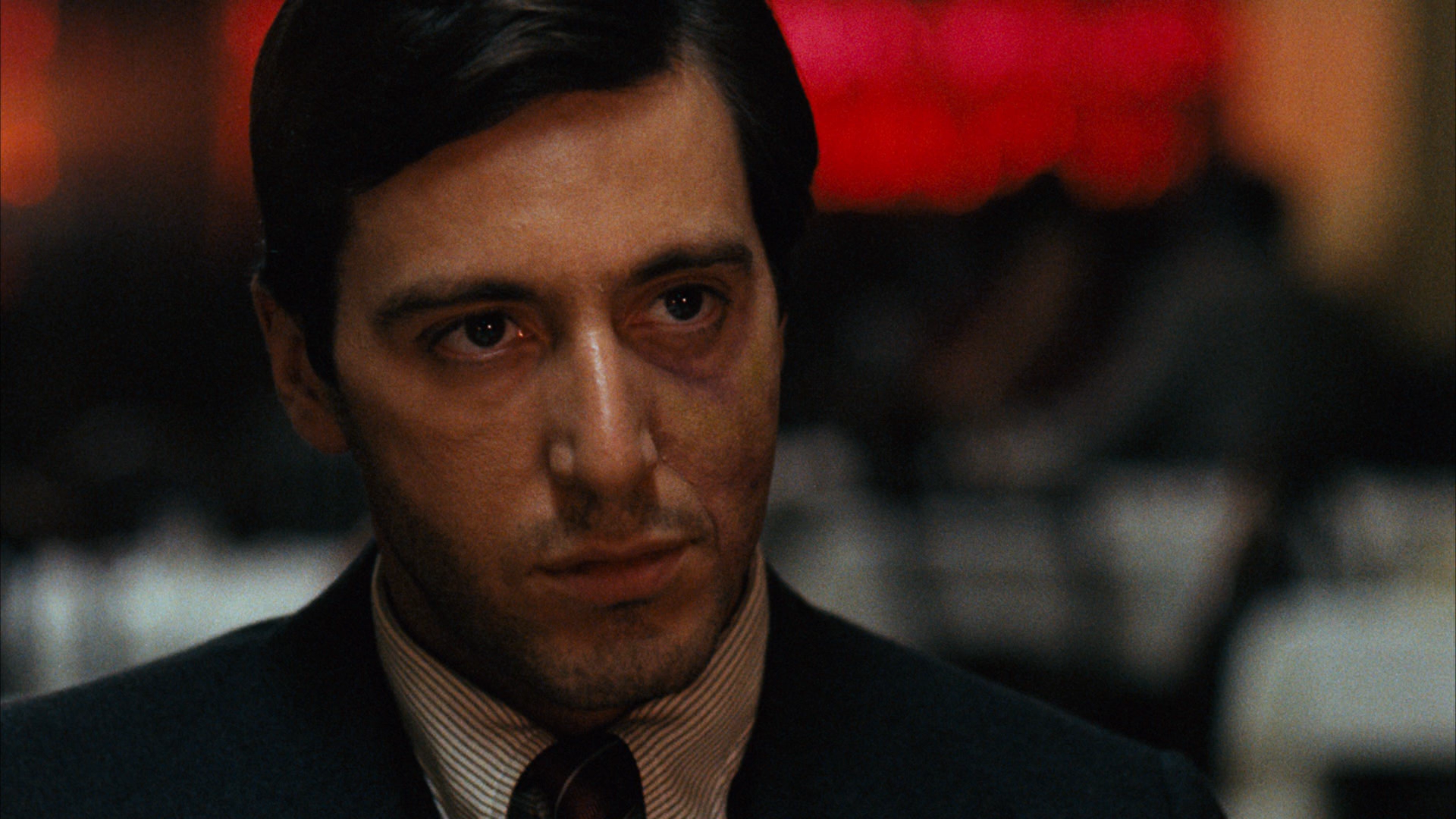 Michael is shipped off to Sicily to hide away until the heat has died down. The Sicily scenes are beautiful to look at, the sun-soaked hillsides in stark contrast to the low lit and underexposed New York scenes. Michael meets, fall in love with, and marries a young Sicilian girl (Simonetta Stefanelli) but before too long his crime catches up with him and his new bride is caught in the cross-hairs. 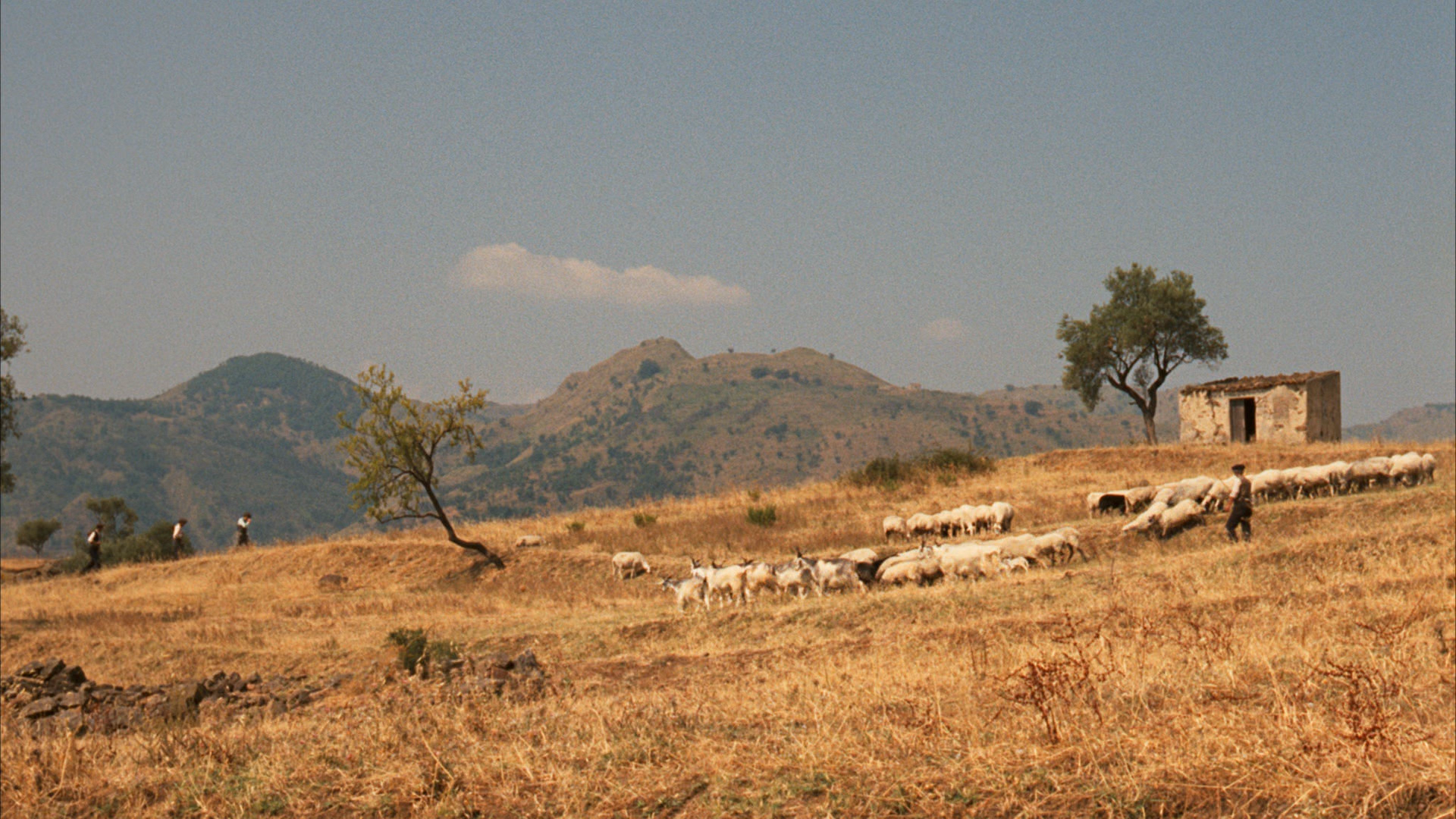 Back in New York, Sonny, fuelled by fury at his brother-in-law’s abuse of his sister, gets stupid and leaves his property alone. The Tattaglias bring Sonny down in a hail of gunfire, eliminating Vito’s oldest son and heir. A recovered and devastated Vito arranges a meeting with the Five Families and swears no vengeance will be taken for Sonny and withdrawing his opposition to the drug business, in order to restore peace in New York. Michael is then able to return to America, where he quickly reunites with Kay. With Fredo not cut out to lead and the highly capable consigliere Tom not a Corleone, Michael must step up and take Sonny’s place as Vito’s successor. 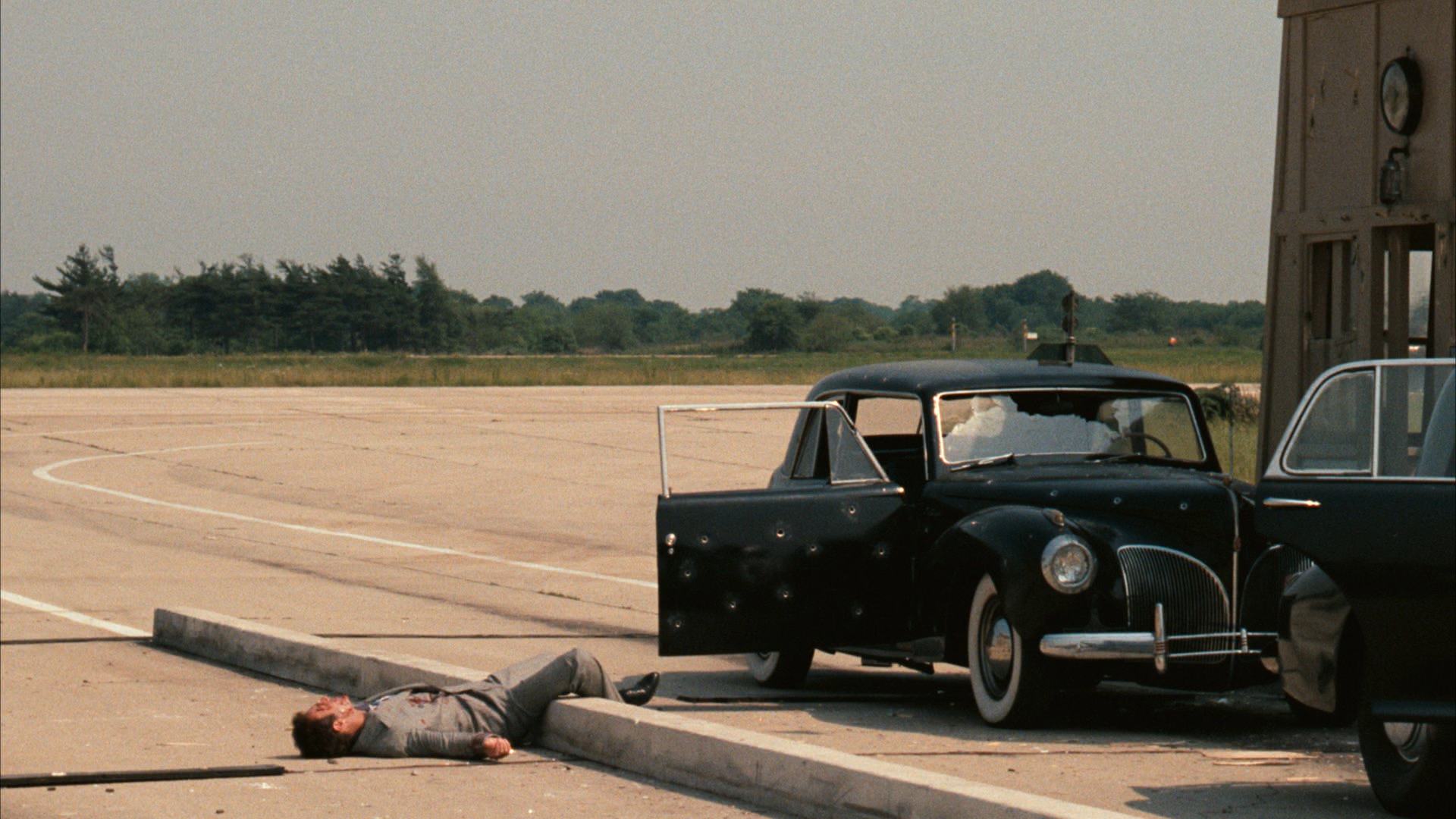 A few years later, Michael has taken the reins from his ageing and ailing father, and he constantly assures his wife that the Corleones will soon be legitimate. Michael quickly asserts himself in the role and the difference in him becomes quite pronounced. The contrast between Michael in the opening sequence and Michael when he demotes Tom for not being a “wartime consigliere” is enormous, and if not already obvious, it is around this point you realise just how great Pacino’s performance is. 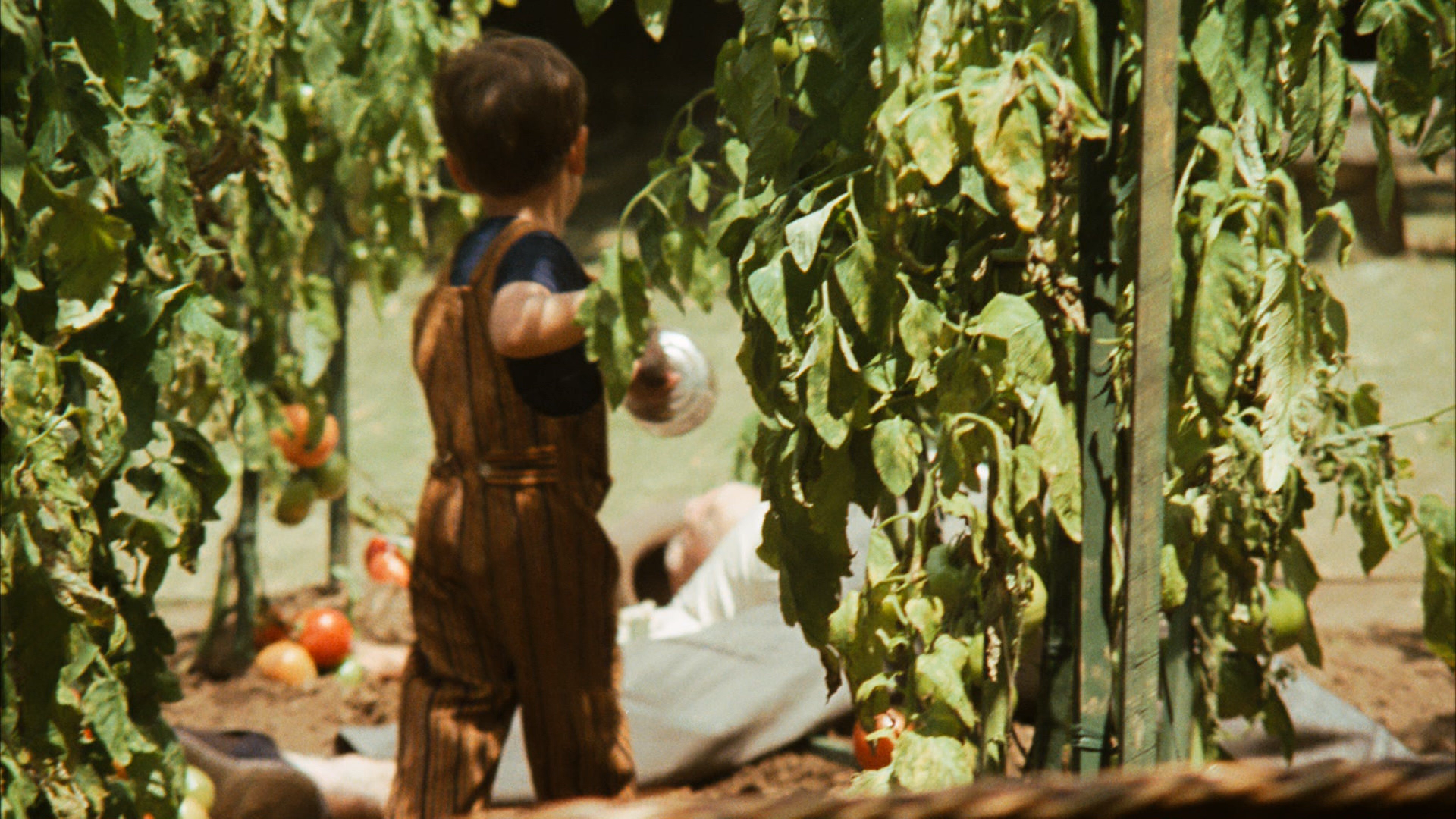 The film ends in 1955, with Vito dying in his vegetable patch and most of New York’s mafia elite following close behind in perhaps the film’s most famous sequence. As his godson is being baptised, Michael’s men systematically take out the other NYC Dons; Coppola cutting back and forth between the two in a blatantly obvious but hugely effective contrast between beginnings and ends. The final moments see Kay lose her final bit of faith in her husband, as she sees the Corleone capos pay Michael homage as their new Don. 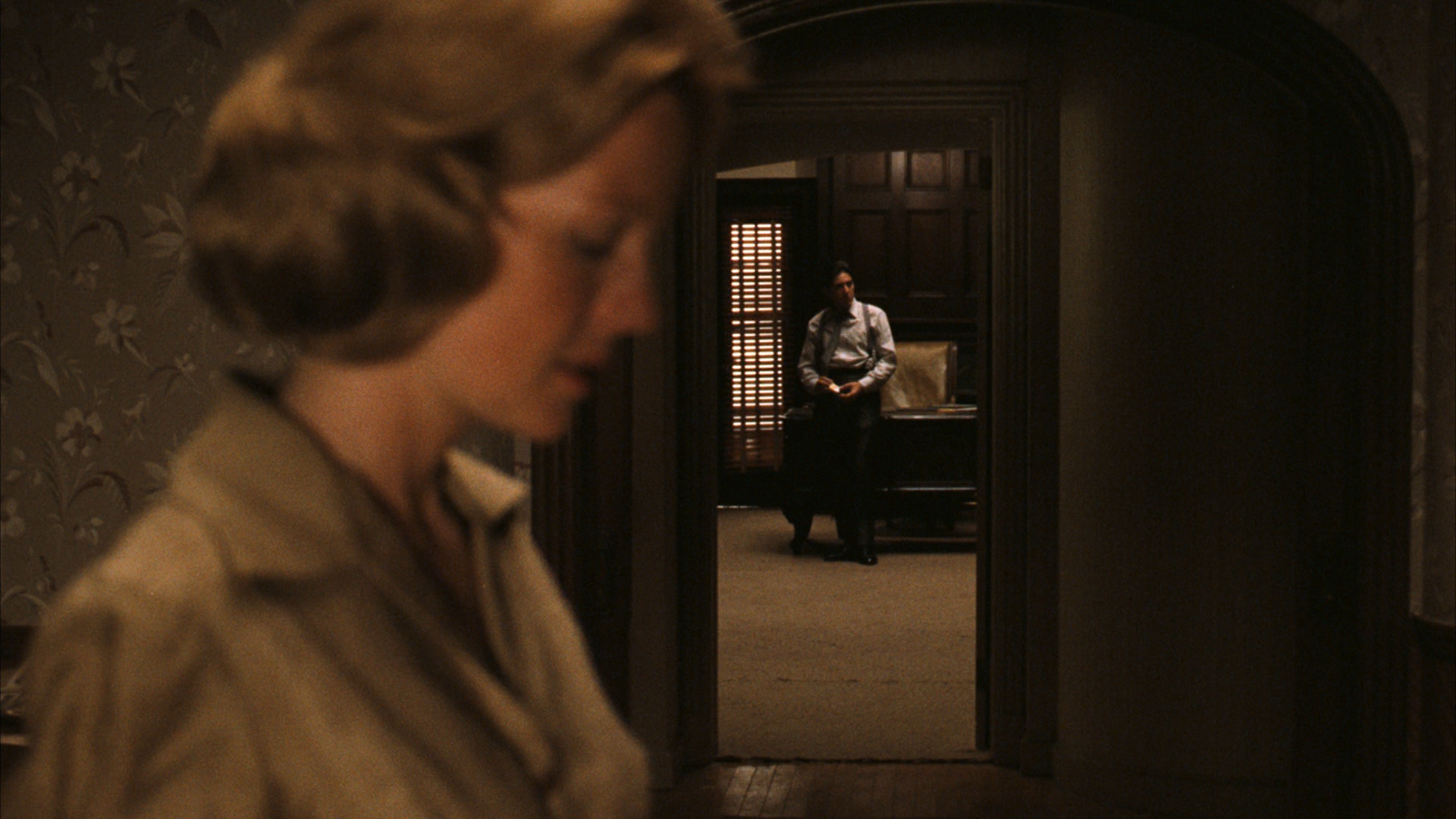 Comparatively understated and less bombastic than its sequel, The Godfather is for me, perhaps the peak of cinema to this point. Full of wonderful performances, deep characterisations, and masterful plotting, it is just scene after scene of brilliance that only becomes richer and more involving on every subsequent viewing.

Following the enormous success of its predecessor, Part II came with almost impossible expectations. However, Francis Ford Coppola is never one to back down from a challenge and in many people’s eyes, he might have even exceeded them with his sequel. Part II has two distinct parts, running concurrently throughout. The first is the early life of Vito Corleone, this time played by relative newcomer Robert DeNiro, in New York in the second decade of the 1900’s. The other is a continuation of the first film, following Michael’s journey as Don Corleone in the late 1950’s.

Michael’s story is mostly around the machinations of being a mafia boss, and the trials and tribulations that come with the territory, including an assassination attempt while he, Kay and their children sleep. Early on we are introduced to the biggest addition to the cast (aside from DeNiro’s young Vito), Jewish businessman Hyman Roth. Played with an impressively subtle menace by Lee Strasberg – the man who taught many of Hollywood’s best how to act, including Pacino and DeNiro – his presence looms over Michael’s portion of the film.

The film moves to Cuba, which is where I believe it loses some steam and resultantly puts it slightly behind Part I. There is still plenty happening, including the significant reveal of Fredo as Michael’s betrayer, but the length of many sequences is felt. Moving back to America Michael faces a Senate committee hearing after his capo Frank Pentangeli (Michael V. Gazzo) believing Michael has double-crossed him, agrees to testify against his Don. Michael survives this hurdle when Pentangeli has a change of heart, but elsewhere his world is falling apart. Fredo’s only saving grace is Michael’s reluctance to kill him while their mother lives, while Kay is banished from the family after telling Michael she aborted their child. When the Corleone matriarch does die, Fredo follows close behind.

Vito’s story begins in Corleone, Sicily at the turn of the century, as the then nine-year-old’s family are killed and Vito is forced to escape to America. Taking his town name as his own, Vito Corleone establishes himself, at first slowly, with his wife and infant son Sonny in New York. After arrogant local Don Fanucci (Gastone Moschin) causes Vito to lose his job, he joins up with petty criminal Clemenza (Bruno Kirby) and enters a life of crime.

After taking out Fanucci, in one of the film’s highlights, Vito gradually becomes a respected and integral member of the community. With his family, Vito returns to Corleone, where under the guise of entering the olive oil industry, Vito reveals his former identity and exacts revenge on the man who killed his family. The olive oil is just the kicker, helping Vito to become the wealthy, powerful Don we know from Part I. The film ends with one of my favourite sequences of all time, going back to the original cast, just before Michael enters World War II. It’s a beautifully poignant, melancholy moment; the viewer left to lament the loss of this impressive young man to the world of crime and brutality.

After spending over a decade talking up Part II as the better Godfather film, my last couple of viewings have flipped my opinion. The amazing acting, air-tight yet expansive writing and expertly executed set pieces are present throughout both; however I find the first to have a depth, a richness that is almost impossible to replicate. Many would argue the expansion of the world and these characters in Part II enhances everything set up in Part I, which is a fair point. Nonetheless, I believe the intricate, intensely planned and produced original is hard to top as far as all-round filmmaking goes. Whichever way you lean, you can’t go wrong, as both are right up there at the peak of cinema and operating together, perhaps sit comfortably on top, looking down on everything else.